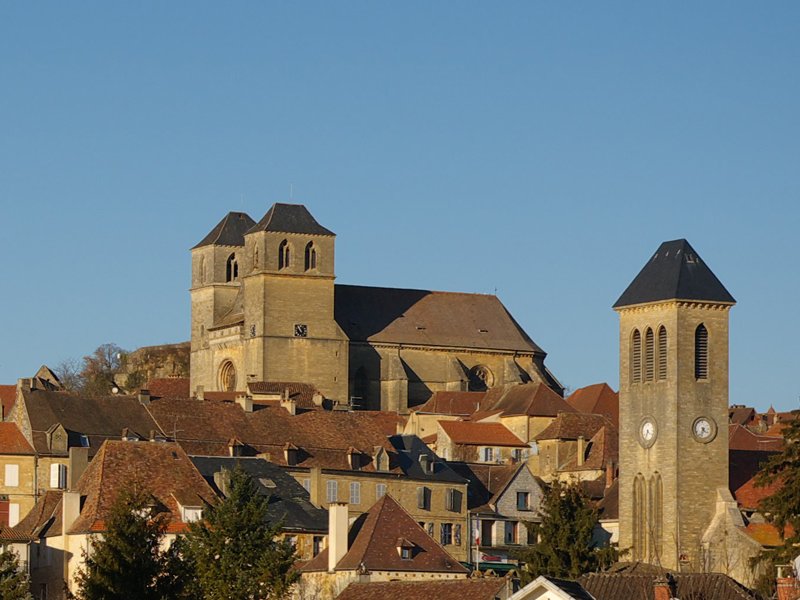 Gourdon lies between Sarlat and Cahors, conveniently served by the Brive–Toulouse train line, and makes a quiet, pleasant base for visiting some of the major places in this part of the Dordogne and Lot. It’s 17km south of the River Dordogne and pretty much at the eastern limit of the luxuriant woods and valleys of Périgord, which give way quite suddenly, at the line of the N20, to the arid limestone landscape of the Causse de Gramat.

In the Middle Ages, Gourdon was an important place, deriving wealth and influence from the presence of four monasteries. It was besieged and captured in 1189 by Richard the Lionheart, who promptly murdered its feudal lords. Legend has it that the archer who fired the fatal shot at Richard during the siege of Châlus was the last surviving member of this family. But more than anything it was the devastation of the Wars of Religion that dispatched the place into centuries of oblivion.

Gourdon is a beautiful town, its medieval centre of yellow-stone houses attached like a swarm of bees to a prominent hilltop, neatly ringed by modern boulevards containing all the shops. From whichever direction you approach, all roads lead to place de la Libération in front of the fortified gateway over rue du Majou, the narrow main street of the old town. It’s lined all the way up with splendid stone houses, some, like the Maison d’Anglars at no. 17, as old as thirteenth-century. At its upper end, rue du Majou debouches into a lovely square in front of the massive but not particularly interesting fourteenth-century church of St-Pierre, where in summer there’s a farmers’ market on Thursday mornings. The handsome Hôtel de Ville stands on one side of the square, and in place des Marronniers behind the church is the family home of the Cavaignacs, who supplied the nation with numerous prominent public figures in the eighteenth and nineteenth centuries, including the notoriously brutal general who put down the Paris workers’ attempts to defend the Second Republic in June 1848. From the square, steps climb to the top of the hill, where the castle once stood and from where there is a superb view over the Dordogne valley and surroundings.

A couple of kilometres along the Sarlat road in the direction of Cougnac from Gourdon, is a very interesting cave, the Grottes de Cougnac, discovered in 1949 (daily: April–June & Sept 9.30–11am & 2–5pm; July & Aug 9.30am–6pm; Oct 10–11am & 2–6pm; €5.35). It has beautiful rock formations as well as some fine prehistoric paintings rather similar to those at Pech-Merle.